Noize Suppressor about bringing back Sonar Live: “I wanted to keep it exclusive for something really cool“

In 2009 the world first witnessed ‘Noize Suppressor presents Sonar’: an exclusive live-act with an exclusive hardcore machine. After a couple years of silence around the Sonar, Noize Suppressor is bringing it back for Resonate – Hardcore Classics. We visited Alessandro to talk about creating the Sonar, its comeback and the upcoming Resonate.

The Sonar is an extraordinary machine which is created and designed completely by mister Noize Suppressor himself. “I always try to come up with new ideas, not really for the people but also for myself: I love to express myself in a live performance.“ This was already the case 15 years ago, when he used other machines for his performances. “Back in 2003, I used this bowl above which you could wave your hand and would filter sound. Then it broke down and I couldn’t buy a new one since the company went bankrupt and the thing just didn’t exist anymore! However, I always got inspired of it. I was the only one using it and everyone always went bananas when they saw it.“ After doing research on recreating such a machine and how to build it into an entire live-set, Noize Suppressor came up with the Sonar a few years later.

Alessandro basicly build the entire Sonar himself. “But at one point I got stuck because it’s really technical and I’m not a technician. I’m just a dude that loves hardcore and was driven by my needs and passion for creating something new. So I had an engineer that helped me out finalizing it.“ The first performance followed soon in 2009, with a tiny version of today’s Sonar. “It had a few pads on it and when I look back at the pictures I’m like damn this thing is so skinny haha! So that was the 1.1 version and this is the 2.0. This one has pretty much no limitations and you can even trigger lights, fireshows and flames with it. At one edition of Masters of Hardcore, we even triggered videos and moved the screen just with the Sonar.“ 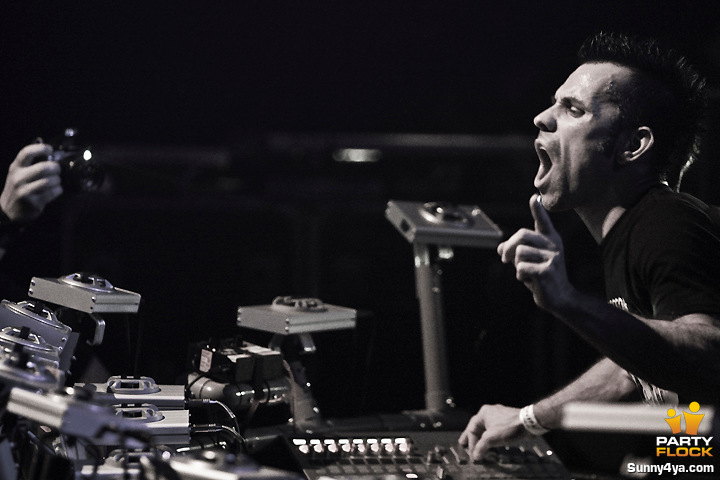 It’s probably obvious now the Sonar is an elaborate machine. But how does it work exactly? “With the Sonar, you’re like a magician. You wave your hands in the air and sound appears out of each pad, which I of course pre-programmed. It’s an electronic instrument and instead of touching it uses infrared sensors.“ Since the Sonar is like a grand mix between different instruments, Noize Suppressor had to practice on it a lot, and he still is. “I will probably never get full use out of it because it’s such an hybrid. It’s a big question mark: you never know whether it’s going to blow up and I guess that’s the beauty of it. The Sonar reacts to the environment you’re in. So, when you’re practising in the studio you have steady lights and a controlled environment. When I’m on stage, it’s totally different. Sometimes I’m adjusting the machine while I am playing which truly is a suicide mission. Again, it’s a hardcore machine and I accept that. It keeps you sharp and you really have to be with this thing.“

“If you think you have a kick-ass event, of course the Sonar can be there as well!“

Back in the days, the Sonar even evolved into two versions: one for foreign travel and one for car travel. This because of a series of unfortunate events during the Sonar World Tour. “I had one show in Australia and when I landed in Sydney they told me the Sonar got lost. Imagine after 1.5 day travelling I had to start all over and come up with ¾ of the Sonar that very same day. It was quite an experience. You can understand I had to come up with an idea so this wouldn’t happen anymore, so I schaled everything down on PVC/plastic pipes. Now I have two Sonars: you learn from your experiences.“

At one point, after the Sonar World Tour and other performances, the live-act slowly moved out of the picture. “I wanted to keep it exclusive for something really cool, something that would leave an impression. The Sonar is an exclusive thing by just looking at it in my opinion, and it’s always meant like that. So long story short: Noize Suppressor presents Sonar is an exclusive live-act and it shows up on special occasions.“ The time has come for one of these special occasions: Resonate – Hardcore Classics. The Sonar is making its exclusive comeback at this party. This means the live-act is available again for other events too. “If you think you have a kick-ass event, of course the Sonar can be there as well!“

Resonate is an event that focusses on the hardcore classics period: 2005-2011, which according to Noize Suppressor is a great concept. “I think right now, there is a gap of what they call millennium hardcore (for me all is just hardcore no matter what). Resonate, being the first one to fill this gap, is being successful because of this. They came up with a great trailer and I appreciate the amount of energy and effort they are putting in.“ Bike is therefore very excited about the 17th of November. “I got a good feeling about this party. I’m expecting to bring back lots of memories and it will be just like a reunion. Lots of ‘gezelligheid’!“

Noize Suppressor presents Sonar LIVE will be an entire experience. “Everytime I bring a live-act no matter what kind of act it is, I like to bring something more extra: something more live, something more entertaining, something more linked to the crowd and in this case I will bring MC mister Multiplex to Resonate. That’s not linked to the Sonar specifically but more about Noize Suppressor Live. So at Resonate it will be the three of us: Me, Mr MC and Sonar the Hardcore Machine!“ For the future, Alessandro also has loads of things planned with the Sonar. “2019 is going to be the Sonar show. You’ll be seeing the Sonar more often and I’ll keep on looking for inspiration and keep on moving forward.“

Resonate 2018 – Hardcore Classics (2005-2011) will take place on the 17th of November at the Autotron in Rosmalen. Tickets are completely sold out for the second time. For more info, visit the official website of the event.